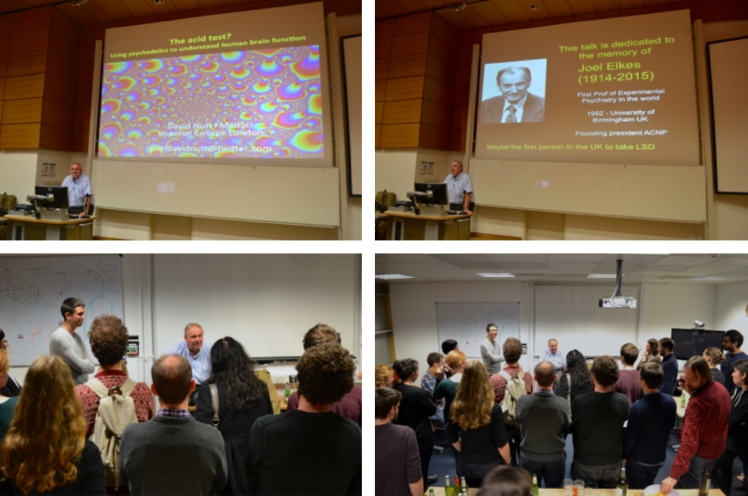 Professor David Nutt, a neuropsychopharmacologist at Imperial College London was NEUReka!’s first speaker of the new year. With a full house, he eloquently argued why the study of psychedelic drugs is important to neuroscience research and how these drugs might ultimately be useful in psychiatric therapies.

Before psychedelic drugs were banned in the 1960s, scientists used them both to understand how they change brain function and to gain insights for scientific problems, such as Noble Laureates Francis Crick (double helix) and Kary Mullis (PCR) did. Since then, studies using hallucinogenic drugs decreased drastically to almost zero, if not for the efforts of some strong minded scientists such as Prof. Nutt and collaborators.

Understanding how these drugs work leads to an understanding of how consciousness works. For the first time, the effects of LSD (lysergic acid diethylamide), a non-selective serotonin-receptor agonist, were studied in the human brain using functional magnetic resonance imaging (fMRI). Under the effect of LSD, there is an increase of global functional connectivity of cortical and sub-cortical regions in the brain. For instance, the visual cortex has increased connectivity with other brain regions, which explains the vivid hallucinations individuals under the influence of LSD report. Moreover, LSD causes the loss of neuronal synchronization, compromising the boundaries between the self and the surrounding environment. This phenomenon is described as ‘‘ego dissolution’’ which is the loss of subjective self-identity and the sense of “melting” with surrounding people and environment.

As a clinician, Prof. Nutt is also interested in investigating how psychedelics can be use as possible therapeutic tools for psychiatric disorders. While studying the effects of psilocybin (the active ingredient in magic mushrooms) on the human brain, his team found that there was a decrease in blood flow in the anterior, posterior and anterior cingulate cortex as well as in neuronal activity. Further studies showed that this occurs due to the stimulation of 5-HT2A receptors, which are important for the integration of sensory inputs. As expected, these receptors are densely expressed in the posterior and anterior cingulate cortex.

Hence, psilocybin activates these receptors in projection neurons, which in turn activates inhibitory fast-spiking interneurons that also express 5-HT2A receptors. Overall, there is an excess of inhibition that reduces neuronal activity in the presence of psilocybin.

Psilocybin attenuates activity also in the ventral medial prefrontal cortex and, interestingly, a number of treatments for depression are known to suppress the activity of this region. Furthermore, in depressed patients there is a higher density of 5HT2A receptors probably due to an attempt of the system to compensate for reduced levels of serotonin in the brain (5HT). In an effort to test whether psilocybin can be used as therapy for treatment-resistant depression, psilocybin was administrated to depressed patients, in controlled quantities, during psychotherapeutic sessions. Results showed that patients reported ameliorated symptoms for at least one week. Psilocybin seems to diminish network activity that is overactive in depressed individuals. These findings show not only the potential medical value of psychedelic drugs, but also that they can be used to understand human brain function.

To read the latest David Nutt’s papers in PNAS and Current Biology, please click on the links below.

Neural correlates of the LSD experience revealed by multimodal neuroimaging